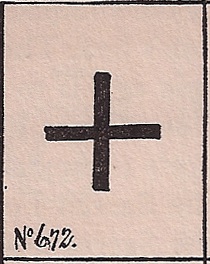 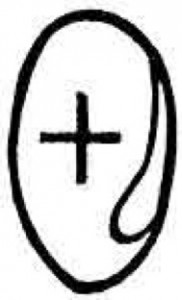 CROSS SYMBOLS OF THE SACRED FOUR.–The Specialized Cross was one of the figures used by the ancients to denote the Sacred Four–the Four Great Primary Forces. The cross was always a favorite symbol among the ancients probably because they found it more expressive than any other figure. Studying and writing about the Sacred Four appears also to have been an absorbing theme with them. Today the Pueblo Indians of Arizona and New Mexico refer to the Sacred Four as “Those above.”
The mother of all crosses was plain with four arms of equal length. I first find it in the Sacred and Inspired Writings as the symbol of The Sacred Four–The Great Creative Forces.
Mexican Tablet No. 672: Is an exact duplication of the cross heretofore mentioned as appearing in the Oriental copies of the Sacred Inspired Writings of Mu. As time went on this cross evolved. It developed into four distinct lines, becoming more intricate all the time.
1. The end of the first line and the shortest, I have called the Pyramid Cross.
2. The end of the second line is a cross formed of four loops, having the symbol of the Deity in the center. These I have called the Loop Crosses.
3. The end of the third line is the well-known Swastika, known as “the good luck symbol.”
4. The end of the fourth line was the winged circle. The ancients rioted in designs for this figure; the Egyptians excelling others in beautiful devices and marvelous artistry.
Besides these four main lines, there were many single special designs.

This entry was posted in Uncategorized. Bookmark the permalink.